It became famous in 1863, when Ben Hall and his gang of bushrangers took over the hotel for 3 days.

In 2013 the Royal was again the centre of attention in Canowindra when it celebrated the 150 year Jubilee with a re enactment of Ben Hall and the Bushrangers riding down the main street and taking over the pub.

It is a clean, country style pub with lots of atmosphere. 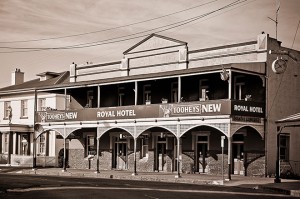